"A bank is a place where they lend you an umbrella in fair weather and ask for it back when it begins to rain." - Robert Frost

Feudalism refers to a system of social, political and economical control which is best represented by the Western European societies of the Middle Ages 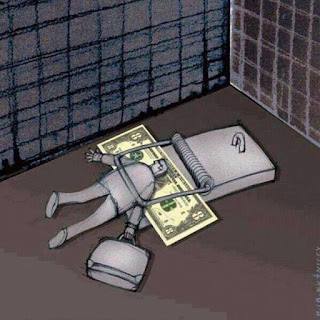 Feudalism was a combination of legal and military customs in medieval Europe that flourished between the 9th and 15th centuries.
Broadly defined, it was a way of structuring society around relationships derived from the holding of land in exchange for service or labour.
An early form of feudalism existed in the Frankish lands of Western Europe in the 8c. All land was traditionally the property of the monarch, therefore prospective tenants had to petition the king for a benefice or land grant, which lasted for one lifetime.

Gradually the concept of providing land in return for acts of service emerged, allowing a king or lord to retain ownership of and access to the land they granted. Benefices were soon to disappear altogether, replaced by hereditary fiefs as royal power increasingly gave way to regional dynasties.
The system spread south and east as it matured and became the dominant European social and military structure.

This marks my 10th year of blogging; you can make a donation and get all the blog post in book format.

Posted by Emmanuel Sodipo at 3:14 AM No comments: