The Magnetism of Stupidity 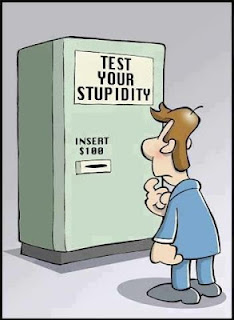 Most executives rarely think that organizational inefficiencies start with
their own management team’s stupidity.

“Stupidity is brainless; it doesn’t need to think, get organized, or plan ahead to generate a combined effect.......Giancarlo Livraghi

When elements of the management team are dysfunctional they soon start recruiting people with similar traits, the organization becomes polarized  with massive pool of super stupid.

Teamwork is also stifled when management has not clearly communicated their vision and strategic plan to the organization as a whole.

This management inefficiencies soon runs the entire organization into extinction

Look out for the following dysfunctional trait:

•         Super-human that does not need the help of anyone
•         He does his own thing without asking the advice or input of anyone
•         So smart that simple communication with anyone on the team is an  absolute waste of their time and energy
•         You just don’t know what their temperament will be.
•         Everything has got to go their way and can not see beyond themselves

Coincidence can put wise words in anyone's mouth.........But the transfer of intelligence is a much more complex process