Believe those who are seeking the truth; doubt those who find it..... Andre Gid 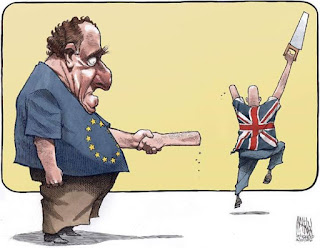 To put it bluntly, during the 20th century Germany twice failed to achieve a dominant position on the European Continent by brutal military force. Following World War II, and thanks to their special relationship with the U.S. and its business community, Germany gained hegemony in Europe without firing a single shot.

For Britain now defiantly concentrated on the preservation of its Empire, the wartime special relationship with the U.S was slowly eroding. Denying these new postwar realities, British memory of the special relationship became a myth. Margaret Thatcher never admitted how dependent her government had become on the U.S. With the Empire still shrinking, she also ignored that Washington had urged her predecessors to join the European Economic Community. She opposed the reunification of Germany in 1990 but had to fall into line when George H. W. Bush decided to pave the way for it.


These setbacks highlight a bitter irony: It was Germany that the U.S. forged a special relationship with after the six years of war against Hitler. After 1945 U.S. experts quickly discovered that West Germany, Allied bombing notwithstanding, still had greater industrial potential than Britain. This potential, if mobilized, could be used as the engine for the growth and modernization of Western Europe.

Beware of half truth, you may get hold of the wrong half......

Posted by Emmanuel Sodipo at 3:02 AM No comments: